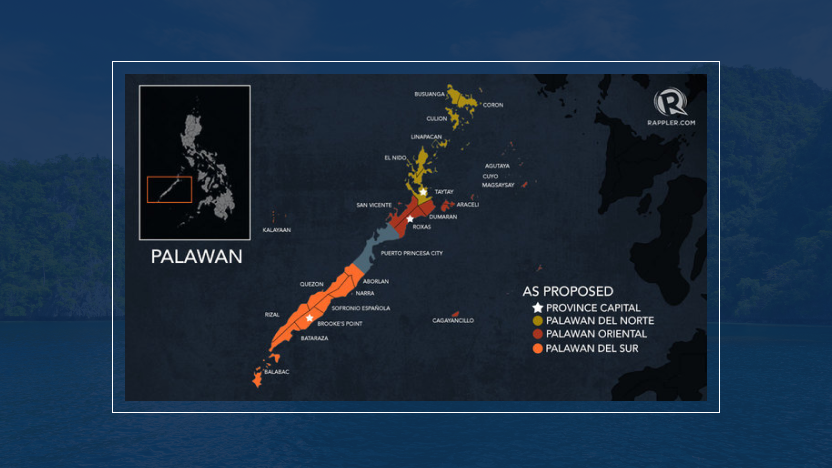 Republic Act No. 11259 – signed on April 5 and released about a week later – divides Palawan into the provinces of Palawan del Norte, Palawan Oriental, and Palawan del Sur, with the latter as the mother province.

The new provinces will be created upon approval of a majority voters in affected areas in a plebiscite to be conducted and supervised by the Commission on Elections on the second Monday of May 2020.

Residents of Puerto Princesa City – a highly-urbanized city – are not qualified to vote in the plebiscite and for candidates for provincial elective positions. Puerto Princesa residents had earlier opposed this provision.

The municipalities of the new provinces under RA 11259 are as follows:

Once the new provinces are created, the ownership of the real properties and infrastructure projects of each local government unit shall belong to the province where it is located.

In the case of Puerto Princesa, real properties in the city owned by the current Palawan province or held in trust for the national government, will be “co-owned and/or co-managed be the three (3) provinces for the mutual benefit of its constituents.”

“Decision as to its use and disposition shall be made upon consensus of at least two provinces to be embodied in a memorandum of agreement duty entered into in accordance with the Local Government Code of 1991, as amended,” the law said.

Civic groups in Palawan residents had objected to the division of the province, claiming there was no extensive consultation which would have reflected public clamor against the move. (READ: Is it too late to debate the bill breaking up Palawan into 3 provinces)

Senator Risa Hontiveros, the only senator to vote against the measure, had also expressed the same concern.

“Instead of having to face a single, strong provincial government which can mobilize the entire island in its own defense, China will now have the opportunity to infiltrate and influence smaller local government units,” Hontiveros said in November 2018, after the Senate passed its version of the bill.

The House of Representatives passed the measure on August 29, 2018, while the Senate passed it in November of the same year. Amendments to the final bill was concurred in by the House in January of this year.

The law takes effect 15 days upon its publication in the Official Gazette or in a newspaper or general or local circulation.